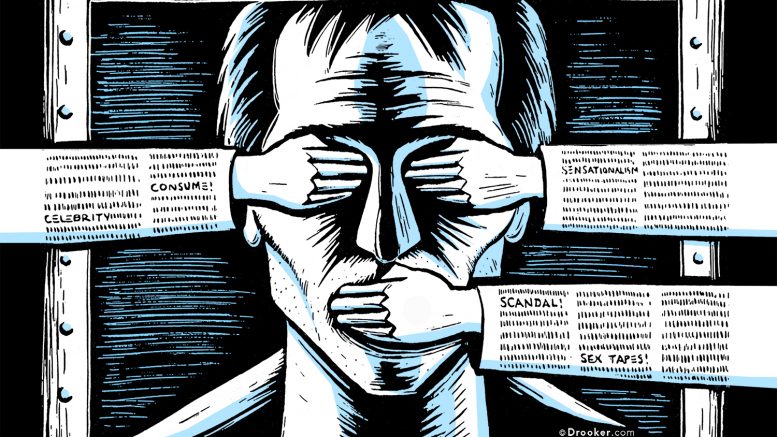 Josef K., the main character of Frank Kafka’s book, “The trial”, woke up one day to find himself tried before a court of law.

Josef K. does not know the charges that were pressed against him. He only knows that he’s under trial, but he doesn’t understand why.

Last January 24th, I never would have thought that I myself would end up in a Kafkian situation. The Italian police rang the doorbell of my apartment.

They came at 6:40 am and at that hour, like many other readers I guess, I was in a deep sleep. They came into my room and they told me that they had a search warrant for my apartment.

I tried to clear my mind in order to know why they were there and what exactly they were looking for. First, they ask me for my ID. Later, they wanted me to show them the documents for my car. So we went to the parking lot of my building and I showed them the documents.

Then after these first requests, I read more carefully the search warrant that authorized them to do all this and I realized that I was in an unreal situation.

The DA office of Rome opened an investigation against me because I wrote on January 24th that the Italian PM Mario Draghi seems to be sick and, as a result, they ordered the seizing of my phone.

This information was shared with me by a very qualified and confidential source. As far as I know, it is not a felony to share news about the health conditions of public figures, such as public officials and politicians.

For instance, last year, the international press shared reserved information about the health conditions of Bergoglio.

Until one has a public assignment, he or she can’t claim privacy rights on this issue.

When I read the paper signed by the magistrates of the DA office of Rome, I couldn’t believe what I was reading.

They pretended that I violated two articles of the Italian criminal code. The first is article 290, which is about the contempt or the insult against the Italian President, the Italian PM or the Constitutional Court.

As you can see here, this is the translation of my Telegram Post about Draghi.

“The rumors that claim that Mario Draghi’s health conditions are worsening seem to be confirmed. According to sources close to the institutional environments, Draghi’s illness is quite serious. Whatever the outcome of the Presidential election will be, Draghi seems to be intentioned to leave his post because of his precarious health condition, and also in order to avoid being used as a patsy by the political parties for the incoming economic crisis.”

There are no insults. There is no contempt as you can see. My article shared information that the Italian mainstream media is not sharing for reasons that you can imagine.

The Italian mainstream media are owned by a few oligarchs who are completely aligned with the globalist world and with some influential powerful circles, such as the WEF, the Bilderberg Group and the Trilateral Commission.

One family in particular, the Elkanns, own 60% of the Italian MSM. The Elkann family has a relationship with the Rothschilds and they together both own the magazine, The Economist, which can be considered for many aspects as the mouthpiece of the New World Order.

So if I didn’t insult or show any contempt towards Draghi, what is my crime? I gave a look at the other article, 656 of the criminal code, that the authorities claimed I violated.

This article is about spreading fake news that could create some kind of alarm in the public opinion. Since when does writing about the health conditions of a public official create “alarm” in the public? Moreover, it would be interesting to ask the magistrates of the Rome District Attorney’s office how they know that my news is “fake”?

In order to make such an allegation, they should present irrefutable proof of that and it would be interesting to know their source, because Draghi has been quiet about this issue so far.

He neither confirmed nor denied. He did not say anything.

However, the worst is yet to come because you are about to see the few lines that the judges wrote to authorize this “operation”.

These are their words:

“Because (he), on his Telegram Channel, whose name is Cesare Sacchetti, shared a message that contained fake news about alleged precarious health conditions of the current Prime Minister, Mario Draghi, with consequent and predictable instigation to a reaction in the subversive antigovernment NO vax area.” 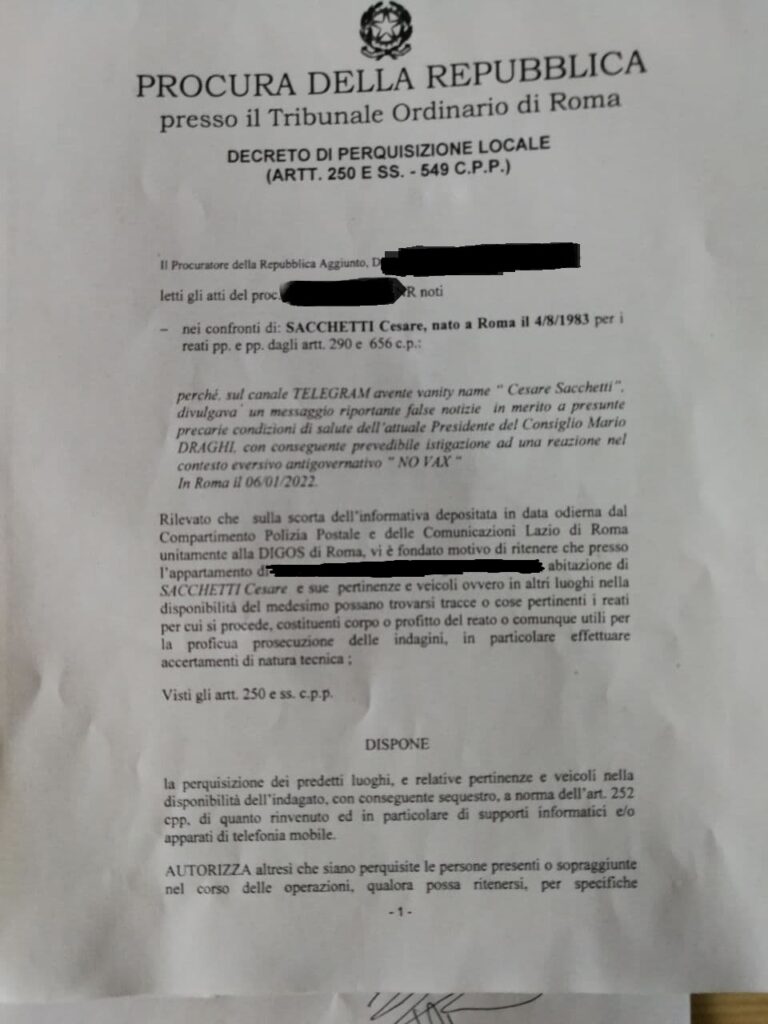 The search warrant issued by the DA office of Rome

The first thing that we should point out is about the last unreal words. What is exactly the subversive antigovernment NO vax area?

NO vax is a meaningless expression that was created by the media to label those who are not even against the vaccine, but they just present legitimate doubts about the mandates that impose experimental jabs to people otherwise they face a ban from society.

Moreover, in what way does having these doubts be considered a “subversive” action? According to the Italian Constitution, these opinions belong to the free thought rights and they are not supposed to be touched.

These are the rules of Western liberal democracies, but these political systems have shown all their hypocrisy because they allow opinions and free thought only when these match the ones of the ruling government.

Then there is something else that is even more unreal in the document signed by the Italian investigators.

In what way does speaking about Draghi’s health conditions relate to a “predictable instigation” to an imaginary subversive no VAX area?

How can the former trigger the latter? It has no sense, but this entire story has no sense. Most probably, this “operation” has nothing to do with the alleged breaking of criminal laws. This operation aims to scare or intimidate journalists who are not aligned with unique thought, which is the one shaped by the globalist think-tanks.

What I should ask myself is this: Did someone want to send me a message through the seizing of my phone?

Did I touch some very sensitive nerve with my article about Draghi’s health condition?

As you probably already know, Draghi struggled to receive the highest appointment in Italian politics, which is the Presidency of the Republic.

Judging by the outcome, his negotiations with the political parties were a complete failure. The parties wanted Draghi to stay where he is, namely behind the walls of Palazzo Chigi, the residence of the Italian PMs.

Italian politics would like Draghi to continue his job because the EU technocrat perfectly suits the dress of a patsy.

Italian economics is headed for a massive crisis because of the artificial crisis energy and because of the COVID restrictions enforced by this government.

This was Draghi’s mission since the very beginning. Freemasonry and international finance had a sort of agreement with him. Draghi’s job was to complete the economic killing of Italy.

His reward was supposed to be the presidency of the Republic, but that pact was broken.

Politics wants Draghi to stay in his current post because if an economic meltdown ensues, Draghi could be the perfect patsy to blame while everyone, including Draghi, should be held accountable for this tragedy.

The former ECB governor is very aware of that and he’s already working on an escape plan. Some very qualified sources claim that Draghi is seeking an assignment in the comfortable and safe haven of the EU institutions.

He wants to leave his current job in any case. Therefore, I ask myself whether the information that I shared “disturbed” some negotiation that is in progress.

I don’t have the answer to this question yet, but if I’ll find it, I’m going to share it here.

What I do know is that it is not normal at all that a journalist receives a visit from the police in the early morning for having done his job.

I also know that whoever set in motion this mechanism committed a fatal mistake. Now everyone will start talking about Draghi’s health conditions and I know I’ll be considered as a sort of martyr for free information, something which I think I’m really not.

Meanwhile, I will keep doing my job until I will be allowed to and until there will be readers who are interested in my writing.

5 thoughts on “The seizing of my phone and the search warrant of my apartment: life under Draghi’s regime”