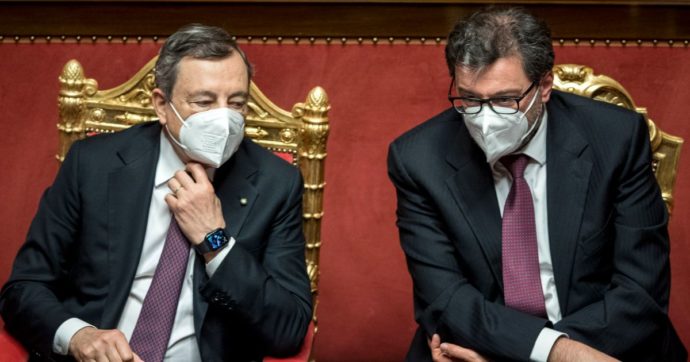 The day before January 6th, 2022 in Italy was not an ordinary day. On January 5th, Draghi’s government held a cabinet meeting to discuss further COVID restrictions.

For weeks, the Italian mainstream media terrified the Italian people by conveying the idea that Draghi was about to carry out a general vaccine mandate and the so-called super green pass for every kind of worker.

However, the fearmongering scenario announced by the media didn’t happen. In the hours before January 5th, much of this terrorism proved to be once again a bluff to scare and terrify people.

The Italian media have been enforcing a sort of shock and awe strategy for months against the Italian people. If you look at any Italian mainstream media, you will find the notion that the green pass and the other restrictions will last forever.

At this particular moment, the media have the mission to weaken the resistance of those who did not get the COVID experimental serum and the Italian oligarchs who own the MSM hope to succeed with this purpose through continuous psychological aggression.

On the morning of January 5th, the media revealed that the government had no intention of extending a general vaccine mandate or the supergreen pass (SGP) for all kinds of workers.

Draghi was considering “only” an extension of the SGP for workers older than 60, but a coup de theatre took place in the mid-morning.

One of the closest men to Mario Draghi, the ministry of Economic Development, Giancarlo Giorgetti, left Rome headed to his home in Varese, in Northern Italy.

Giancarlo Giorgetti is considered a sort of eminence grise of the Italian deep state. He is one of the historical members of the Northern League, the party that wanted to split Northern Italy from the rest of Italy.

In recent years, the old Northern League abandoned its original political goal to embrace a more nationalistic stance under the direction of Matteo Salvini.

Unfortunately, the recent events showed the Italian public that the new League of Matteo Salvini was a political charade, or maybe the term gate-keeper could be more appropriate to define the real nature of this party.

The League that vowed to leave the Euro, a currency that provoked a massive deindustrialization of Italy, opened the doors of the Italian government to Mario Draghi, the former ECB governor who saved the Euro and condemned Italy and other Southern Europe countries to economic death.

Giorgetti has always been a close friend of Draghi. In a certain way, Giorgetti could be considered one of the architects of Draghi’s rise to power as Italy’s PM.

However, this special relationship was probably strained irreparably. Giorgetti was described as furious and upset over the prospect of increasing COVID vaccine mandates and extending the SGP.

Giorgetti knows very well that both the public and the private sector are suffering from a lack of workers.

Since the basic Green Pass was approved last October, many workers chose to boycott this restriction.

Many workers simply didn’t show up at work. They chose to go on sick-leave or to take extended holidays.

Even many policemen and Carabinieri are boycotting these restrictions in this way. The government is quite aware of this situation, but is pretending that the problem simply doesn’t exist, maybe because it naively hopes that the problem will go away by ignoring it.

It is not happening, of course. Things are getting worse and Giorgetti knows that the entire national production could be completely paralyzed if other restrictions are approved.

This is the reason why Giorgetti left Rome and did not take part in the latest Council of Ministries. Giorgetti approved and backed Draghi’s government so far. Giorgetti is a man who belongs to the globalist powers who rule Italy and Europe and he has several connections in Washington too.

He’s a politician who firmly backs the Euro-Atlantic block that President Trump tried to contain.

Giorgetti completely belongs to these supranational circles. However, Giorgetti realized something very simple. If Draghi keeps enforcing restrictions and mandates, the country will go bankrupt. And Giorgetti, of course, is not worried much for the fate of Italy, but rather for his own career.

Revolts and protests will ensue if the Italian political system provokes a default. Italy is already a boiling pot, ready to explode at any moment.

Last December, we had a clear example of this. On the same day when the jab mandate for the police and Carabinieri was enforced, a fire broke out in the Salvo D’Acquisto Carabinieri station in Rome.

The fire looked like a direct message to the government. The not vaccinated police officers are tired of being persecuted by this regime and they are ready to carry out extreme actions.

An experienced politician like Giorgetti knows that this situation is unsustainable and doesn’t want to be wiped away by the incoming political chaos.

Therefore, Giorgetti deserted the latest government meeting, and Draghi was described as “disappointed” and “surprised” by his friend’s reaction.

People who don’t comply with the vaccine mandate could get a fine of 100 euros buy there are many doubts about the effectiveness of these sanctions.

There are not enough workers to enforce these controls and the government is not hiring more employees in order to do that.

There are doubts even for the SGP because workers could go again on sick leave and take other holidays.

Both the public and private sectors cannot afford this scenario.

It would imply the paralysis of the national production.

It is the scenario that Giorgetti fears the most.

In these past days, things have not improved. According to the US MSM too, Draghi has lost control of the Italian political parties.

Globalism chose Draghi to complete the destruction of Italy

Italian politics rolled out the red carpet to Draghi because Draghi came to Italy to finish the job that he himself had begun in 1992.

At that time, Draghi was working for the government. He was the general director of the Italian Ministry of Economics. However, when he boarded the Britannia yacht of Queen Elizabeth on the night of June 2, 1992, he stopped representing Italy.

He started representing the international finance that was on that boat to buy the Italian public industry.

Draghi sold off the best national public companies owned by the government. Goldman Sachs, JP Morgan and Morgan and Stanley did some very good business that night.

They acquired the Italian strategic assets at a very low price. Later, Draghi got his reward for this “job”.

He was hired by Goldman Sachs in 2001. International finance loves Draghi because Draghi is probably the best economic hitman in the world.

What happened that night on that boat was part of the decennial war waged against Italy. Former British agent, John Coleman, revealed that in the 70s, the Club of Rome founded by the Rockefeller family decreed this country’s economic and moral destruction.

Italy was too powerful and prosperous. The country that hosts the Catholic Church since millennials had to be destroyed.

Draghi is an agent of this power and he was called to complete the hit job started in 1992.

The Italian deep state completely backed Draghi but now something has changed.

The Italian parties are realizing that following Draghi until the end of this journey means running towards the cliff.

According to some sources close to the Italian institutions, Draghi is already considering an escape plan.

Draghi’s original plan was to be elected as Italy’s President after the work made for the globalist powers that aim to destroy Italy.

However, the Italian parties do not seem inclined to elect him as the next Italian President. They would like him to stay in office because, at this point, Draghi could be a perfect scapegoat for the incoming economic and social upheavals.

Therefore, Draghi is already thinking about a plan B. He would like to receive an appointment in Brussels as President of the EU commission. The incumbent President would leave and take the vacant seat of Sassoli, the former President of the EU Parliament, who has recently passed away.

This seems to be Draghi’s option in case everything precipitates.

There is an atmosphere of general decay in Italy and in Europe. The fake pandemic is dying. Omicron seemed to be the last chance of Davos to revitalize the COVID terrorist operation but apparently the plan is not working.

Denmark announced that the pandemic will end very soon. The British government said that the country will no longer enforce COVID restrictions.

Even Bill Gates, one of the masterminds of the plandemic, had to admit that the globalist agenda at this point is stuck.

Gates had to acknowledge very simple evidence. Governments lost the trust of their citizens.

People came to the conclusion that liberal democracies are a rigged game.

No matter what vote you cast in the ballot, the winner is always the power that controls and finances the political parties.

The winners are those who manoeuver the parties behind the political stage. We are talking about the occult power of the Illuminati families. Their names are Rothschild, Rockefeller, Astor, Dupont, and Morgan.

The media never address them as the real power because they themselves own the media.

The COVID terrorist operation has been at least helpful in this. It has opened the eyes of those who keep them closed.

It has torn apart every mask. Every deception has died. Everything is in plain sight.

People now know that the world is not a happy place where governors want the best for their countries. People have realized that the world is in the hands of a hidden power whose only purpose is to enslave mankind and usher in a one-world government.

This has been the original plan of Davos and the other globalist circles since day 1.

However, these plans seem headed for failure.

More countries are announcing the return to normal life and even the global superpowers, such as the US, China and Russia are distant from the globalist plan.

Therefore, for all these reasons, 2022 seems to be a crucial year for Italy and the entire world.

Italy is a special country because globalism has ancestral hate for it.

Italy is going towards a very politically unstable phase for all the reasons that we have mentioned.

Unfortunately, this political and social chaos seems inevitable. Italy must hold accountable Draghi and the political parties that dragged this great country towards this disaster.

The other countries should follow the same path. Those who betrayed their nations in order to serve the interest of the globalist élite must pay for what they did.

However, it will not be an easy transition. Technocrats who serve these powers like Draghi will try to flee and leave the ship adrift.

All this suffering could be the opportunity to heal the illness of the sick Western world who forgot its real Christian identity.

All this suffering may be necessary to look into ourselves and realize how rotten the liberal and modern world was.

For all these reasons, 2022 could be a historic year. 2022 could be the crossroads to expel the evil that contaminated Italy, Europe and the world for too many decades.

This is why Italy and the world are presently standing before a crossroads that could change their histories forever.