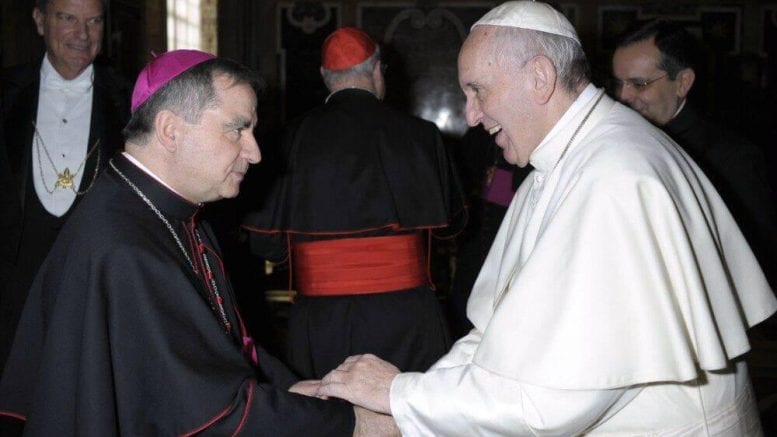 During his latest video, Archbishop Viganò dropped a bombshell that was practically ignored by both the Italian and international media.

Viganò in his speech denounced the masonic plans of the Great Reset and at a certain point of his exposé, he revealed that Pope Francis is the main person responsible for the financial speculation over the infamous London building located in Sloane Avenue.

If this shocking revelation were to be confirmed, it would mean only one thing. The entire official version that depicts Bergoglio as an innocent leader deceived by his collaborators would be an entire fabrication set up by the media to hide the huge responsibilities of the pontiff.

The first media that backed this reconstruction of the facts is the Italian magazine “L’Espresso”.

Last year, L’Espresso claimed that that one of the main persons responsible for the mismanagement of the Vatican funds is Cardinal Angelo Becciu, who served as Substitute of the Secretariat of State of the Holy See from 2011 to 2018.

According to the magazine’s sources, Becciu transferred a portion of the funds allocated to charity works to the accounts of SPES, a society managed by his brother, Tonino Becciu.

On two separate occasions, the Holy See gave an amount of 600,000 euros to SPES.

The first time 300,000 euros were given to Tonino Becciu to finance the renovation of a furnace of his firm.

On another occasion, another 300,000 euros were given to repair a warehouse of this company, which was destroyed in a fire, despite the fact that the insurance policy had paid out the money for the reparation costs.

However, it seems that this was not an isolated case of gross conflicts of interests.

Another brother of Cardinal Becciu, Mario Becciu, who’s a university professor at the Salesian University in Rome, benefitted from his family relationship with the Cardinal for his own business interests.

Mario Becciu is the owner of a company named “Angel’s SRL” that operates in the food and beverage sector.

Apparently, his prelate and influential brother were quite active in recommending the purchasing of his products with Church funds.

Therefore, this system was described by the Italian media as “the Becciu method”; a system based on a blatant conflict of interests and nepotism practices. It’s certainly an apt description, considering Becciu’s particular predilection to favor his family with the funds of the Holy See.

However, this version seems to have some holes. Even if Bergoglio acted in good faith and was not personally involved in these embezzlement practices, he was supposed to have control over what his subordinates were doing.

In this best-case scenario, Bergoglio would be responsible of gross negligence for not having properly overseen the work of his cardinals.

Nevertheless, there are some problems even with this version. Vatican sources have been claiming that during these last years, Bergoglio is aware of everything that happens inside the Vatican walls.

In this version of events within the Holy See, there is a climate of suspicion and oppression(?) that resembles the one lived under the URSS during the Stalin regime.

Like Stalin, Bergoglio has eyes and ears everywhere. Even random conversations between Vatican employees that are considered suspicious by Francis’ informants are reported to the pontiff.

Several employees were sacked without an explanation and only over the presumption that they could be critical of Bergoglio’s policy.

This portrait of a despotic Bergoglio matches perfectly the description provided by Marcantonio Colonna, the author who used this pseudonym to write his shocking book entitled “The dictator pope.”

According to Colonna, Bergoglio often publicly humiliates his collaborators and his use of vulgar language to others is quite frequent.

Behind the Vatican walls, everyone knows the dark side of Bergoglio. A dark side that is completely different from the artificially created media image of a man gifted with compassion and understanding.

The real Bergoglio is arrogant and has no compassion for anyone but himself.

Therefore, if the Pope is a man who rules with an iron fist, has absolute control over the smallest State on Earth, and knows everything that happens in his kingdom; then it seems quite unlikely that he knew nothing about the London financial speculation scandal.

At the crux of this scandal is the story of a botched investment, plain and simple. To better comprehend what really happened, it will be necessary to reconstruct some passages, without which the entire story appears incomprehensible

It’s a story where financial speculators always magically profit off from the Vatican. Strangely, the Holy See never realizes that there are financial scams in all these businesses.

The origins of the London financial scandal

Everything dates back to June 2013, where the Holy See was evaluating some investments. At that time, Cardinal Becciu was the Substitute of the Secretariat and Bishop Perlasca was in charge of the management of the investments.

After considering an investment over Angolan oil, the Secretariat chooses to invest money in the financial fund Athena, which is owned by Raffaele Mincione. He was introduced to the Vatican by Enrico Crasso, a Vatican employee who worked in the Secretariat for years.

Therefore, the Vatican borrowed 200 million euros from Credit Suisse.  100 million were invested in the financial part of the fund and the other 100 million in the real estate property located at Sloane Avenue, in London.

The choice appears to be ill-advised since its inception. It turns out that Mincione used the money he received by the Secretariat to fix his personal debts with a society named ENASARCO.

This will be” the “leitmotiv” of all this investment. The Vatican is turning out to be a sort of bank that wastes cash to finance the business of financial speculators who always “mysteriously” benefit from their agreements with the Holy See.

In the next year, the situation over these investments gets even worse. It turns out that the owner of the Sloane Avenue building is still Raffaele Mincione through his company, Athena.

The Vatican attempts once more to finally acquire the property of the palace, and calls in another speculator, Gianluigi Torzi.

However, even this financial expert takes advantage of the Holy See. Torzi concocts a scheme along with  Mincione to keep the ownership of the London building.

Apparently, nobody in the Secretariat governed by Cardinal Parolin seems to have a business background or seems to understand that there is a serious funds mismanagement in the Vatican.

According to the official inquiry of the Vatican magistrates, the higher ranks of the Holy See, including Bergoglio, do not realize that there’s something wrong about the Sloane Avenue business.

The Vatican appears to be a sort of goldmine for these speculators who always increase their profits through the help of internal collusions, all of which the Vatican investigation does not seem to be too interested of.

Despite all that has taken place, the financial fraud is far from over. In October 2018, Gianluigi Torzi managed to cheat the Secretariat one more time.

Torzi grants himself 1000 shares of the newly formed society GUTT SA, which now owns the London property, and grants other 30.000 shares to the Vatican.

The trick in this agreement is that the Secretariat that owns 30.000 shares has no right of vote, unlike Torzi who has this prerogative.

In this way, Torzi is still the owner of the Sloane Avenue palace.

So after five years and after the Holy See gave 40 million euros to Mincione in the first place to finally acquire the property of this investment, the building is still not in the hands of the Secretariat of State.

Officially, the person who signed the Purchase Share Agreement with Torzi is Bishop Perlasca, but neither Peña Parra, the new Substitute who replaced Becciu, nor Parolin, the Secretary of State, happened to notice that the terms of the contract were conceived to harm the financial interests of the Holy See.

According to the Vatican investigation, both Peña Parra and Parolin received a brief memorandum about the agreement in which the terms of the contracts were not completely disclosed.

However, what seems strange in this story is the fact that neither Pena Parra nor Parolin demanded to know more about this contract.

The Vatican had been hemorrhaging money over the last five years and still didn’t manage to receive ownership of the London property.

Even if we were to believe this version, Parolin, and the Substitute would be responsible for not having properly overseen the investments and ordered immediately an internal investigation to remove the Vatican employees who helped these unscrupulous financiers.

In any case, this entire story is shattered by the latest revelations from Archbishop Vigano.

The Archbishop who has been exposing the corruption of Bergoglio’s papacy over these previous years has revealed that Francis is the real director behind this entire financial operation.

The story that depicts Francis as a naïve ruler deceived by his disloyal collaborators is just an elaborate cover-up engineered by the media.

Viganò was informed by a source, whom he defines as “totally reliable”, that Bergoglio knew everything about this botched investment, and that he had also personally signed one of the contracts.

Therefore, the other prelates and Vatican employees indicted by the Holy See could be defined as patsies.

Some pawns were sacrificed to protect the king.

At the end of this scandal, the truth emerges – that the person who spent the charity funds in speculations is pope Francis himself.

The man who chose to call himself as Saint Francis to praise the poverty of the poor man of Assisi is the same man who authorized a risky financial bet like an aggressive financier from Wall Street would do.

On one particular occasion, Bergoglio said that a Christian that allows corruption to enter is not a Christian and he stinks.

It seems that the one who has stained his white robe with the stink of corruption is the same man who has been preaching against corruption.

His name is Jorge Mario Bergoglio.

6 thoughts on “Viganò’s bombshell:” Bergoglio authorized the financial speculation over the London building””