An internal leaked document of the French government completely confirms the globalist plan known as the Great Reset, which was already mentioned in a previous article.

The most astonishing thing is that the content of this document perfectly matches the revelations made by a Canadian liberal party whistleblower who, in an email published on Reddit, had anticipated the globalist elites’ plan for the next months.

This time the source of the reserved information is not an e-mail, but a time schedule in which are presented the next coronavirus phases for the following months and weeks, until the final realization of the global reset.

Some mainstream media, as the Associated French Press, stated that the document would not be authentic and in order to prove this claim quoted an anonymous source of the French public organism mentioned in the schedule.

However, other French government officials have reached to this blog and confirmed that the reserved report is genuine. 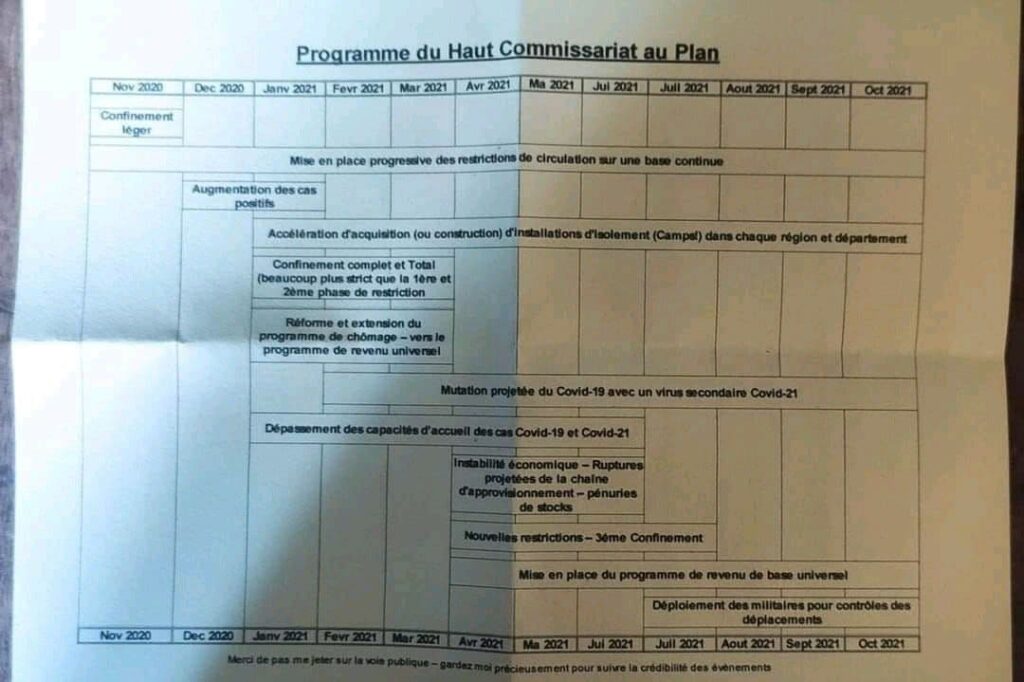 The heading of the schedule mentions the High Commissariat for Planning, a public organization created by the French government in the last September through a presidential decree signed by Emmanuel Macron, who appointed Francois Bayrou at the head of this institution.

Bayrou was the former minister of Justice until 2017, when he resigned because of his involvement in the embezzlement of EU public funds.

Apparently, Macron had given Bayrou this assignment as a sort of “compensation”.

The High Commissariat has generic tasks of coordination in several issues, such as demographic, environmental and cultural areas.

This institution resembles a coordinating office which helps the French government in the execution of political plans.

In this occasion, the Commissariat had received the entire coronavirus crisis’ schedule to follow in the incoming months.

In the month of November, some light lockdowns are mentioned and it is what is already happening in some European countries.

In Germany, for instance, public authorities didn’t give a green light to a complete lockdown.

Spain has been following a similar direction with partial lockdowns.

France has chosen to enforce more severe lockdowns as the ones practiced last spring.

However, in December, the next phase of the plan will begin.

The documents foresees a Covid-19 cases’ increase and this would be the trigger to enforce more restrictive measures in France and in the rest of Europe.

This scenario perfectly matches what the Canadian whistleblower had revealed.

The increase of Covid cases is likely the natural consequence of increased Covid-19 testing.

Public authorities are already experimenting on an antigenic fast swab in order to increase the speed of test results, but the effectiveness of these diagnostics seems to be even more unreliable of the traditional swab test which was already producing large quantities of false positives.

This test is certainly faster and easier to perform, but it could lead to the increase in cases both mentioned by the Canadian insider and the French document.

Therefore, it could not be by chance that this new test has been introduced now.

However, the wave of new cases would pave the way to the next phase planned for 2021.

The globalist élites have distributed this schedule to world governments and as a result, the prime ministers and the presidents worldwide are only executing the instructions received.

If there are doubts about the authenticity of the leaked documents, it could be helpful to read the official ones. The distribution vaccine’s contract between AstraZeneca – the pharmaceutical firm already sentenced for fraud in the USA –  and the countries which would receive the drug, expressly says that the pandemic would be over by next summer, not beyond July 2021.

In the same period in which the new wave would take place, governments will have the task to build Covid facilities, namely concentration camps in which people who refuse to be tested will be deported against their will.

It is not an outlandish “conspiracy theory”, because it is already occurring in some countries in the world.
In New Zealand, prime minister Jacinda Ardern has stated that the people who refuse Covid tests will have to stay in these facilities without their consent.

Therefore, the governments have already started to build these structures to confine those who will not bend to the health dictatorship’s order.

Once these camps will be ready, the so-called third phase would begin.

In 2021, it is already anticipated that virus will mutate, giving birth to the new coronavirus version, namely Covid-21.

If there is skepticism about this information, then it can be helpful to read what the mainstream media paid by the globalist circles are saying.

In one of its recent articles, the Financial Times has explicitly spoken of the new incoming virus.

The media terroristic apparatus will use the mutation – alleged or real – to sow a wave of panic and hysteria even bigger than the one seen until this moment.

The third phase of the Covid operation: economic collapse and deportations

Above all, the global elite want to drag mankind towards the biggest economic crisis ever seen in history.
This huge economic upheaval will create a massive hole in global demand. At that point, the food supply chain would be disrupted.

Bankruptcies and economic busts will be devastating and unprecedented. Unemployment will reach peaks never before seen and people will have problems getting essential food resources.

The timeline of the French government describes this phase and anticipates many riots will occur which would lead to the total collapse of society.

The next step would be the militarization option. Martial law will be the only way to placate the massive rebellions and riots caused by a pre-planned world famine.

It would be a war scenario, but on a global scale.

The great destabilization would have the characteristics of the catalyzing event mentioned by David Rockefeller in 1995 before the United Nations.

This crisis was accurately engineered in order to create a disorder which would take mankind to the New World Order.

Once the masses lose their jobs and the minimum essential resources to survive, they will be offered a choice: receive the universal income.

In Italy, the creator of the Five Stars Movement, Beppe Grillo, has spoken again about this subject. The FSM has been the mouthpiece of one of the main goals of the globalist circles such as the Club of Rome and the Bilderberg Group.

Globalism wants to drag mankind towards a complete deindustrialization and to the end of work, as it was known in the capitalistic economies.

The end of work would basically deprive the individuals of their independence. Only those who will accept the universal pittance would be in the conditions to survive.

The globalist terms have been exposed by the Canadian informer.

The masses flooded by private debts will be asked to renounce their personal belongings in order to receive this basic income. The end of private property will be one of the ultimate goals.

In the global dictatorship, a collectivist society would arise in which the idea of personal property will no longer exist.

If the masses refuse the universal income and the mandatory vaccine that should be distributed in the summer of 2021, they will be forced to stay in the quarantine camps until they will come to globalist terms.

The true nature of globalism as a satanic transhumanistic ideology

It is the final exteriorization of the globalist ideology in which there is no place for free will. There is only total submission.

The true nature of this philosophy is indeed satanic.

This plan has the stated objective to destroy mankind and to reduce us to “cattle” with no rights and devoid of any spiritual sense.

It is the antithesis of Christian religion which sees man as a being gifted of free will and spiritual sense that leads him to reject the blind obedience to evil represented in this case by the global totalitarianism.

The representatives of the global elites are openly speaking of this plan.

It may seem science fiction, but the system already disposes of this technology. In a recent report presented on Italian public TV, a video was shown where a microchip was implanted in the brain of a pig.

Through this technology, it is possible to manipulate the will of the animal. This is what the New World Order has in mind, but men would be in the pig’s shoes.

Freemasonry sees mankind as a mass of “useless eaters.”

It is an ideology that deeply despises mankind and wants to enslave it.

The Great Reset has this sole purpose, namely to pave the way to the last phase of the NWO.

Technology would deprive man of his identity and will render him as a hybrid between a machine and a human being.

It is this transhumanist philosophy, which is deeply intertwined to Satanic and esoteric ideology, which aims to destroy the original creation of God.

Now the plan has been completely shown to us in open sight. There is no “conspiracy”. What was bravely stated by some independent journalists and researchers some decades ago is taking place now.

Global élites have only one obstacle before them and it is Donald Trump, the man whom in their mind was never supposed to become President of the United States.

Globalism orchestrated the biggest electoral fraud in US and probably world history in order to overthrow the President.

However, Trump was fully aware of a this subversive plan and he is ready to respond to the latest deep state backlash. The executive order signed by him in 2018 is the proof that Trump was setting the stage to oust the electoral coup d’état by giving him the power to declare a national emergency and arrest the conspirators involved in this fraud.

The Great Reset could only take place through the direct participation of the US.

This is the reason why globalism wants Joe Biden in the White House.

Biden would be a puppet president in the hands of the deep state that would deliver America to the NWO.

If America falls into the hands of the corrupt Democratic politician blackmailed by China, the leading globalist power, then the globalist cabal would have no more obstacles, but the Russia of Putin, surrounded by China, EU and the US.

The world super government will be the inevitable result as the Great Reset which will enslave whole mankind.
However, Trump has collected a huge amount of proof of the electoral fraud, and he’s ready to fight the final battle.

There is still one month to know if the President will succeed in his legal battle.

Then America will know if it will fall into the globalist hands or if it will definitely abandon this plan to create a one world government wished also by Winston Churchill in 1950.

If America leaves globalism, this plan would never succeed. Globalism needs the US superpower to build a global dictatorship.

The fall of 2020 is about to reach his most important and decisive moment.

The world will soon know if it will awake under the sky of absolute tyranny or if will finally can see again the light of the day.